With its long avenues and scenic vistas out to the Hudson River, Newburgh was often the site for regional firemen's parades.

In 1909, Newburgh was a center for the great Hudson-Fulton statewide celebration and the festivities that October were crowned by a giant firemen's parade that snaked for miles through the city.

It included the unveiling of the new Fireman's Monument paid for by local citizens and designed by local sculptor D.C. Miller. That monument, erected on Dubois Street, was and is a testament to the dedication and sacrifice of the city's bravest.

In 1997, the Newburgh Fire Department celebrated its 200th anniversary and hosted a big parade attended by scores of companies from around the Hudson Valley. 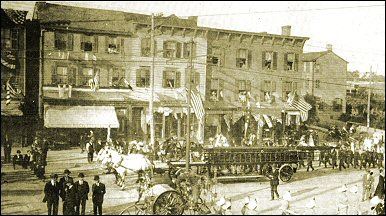