The earliest Newburgh fire companies were the Protection Engine Company, Cataract Engine Company, Washington Engine Company, and Empire Hook and Ladder. More appeared as neighborhoods expanded. In new areas, volunteers met on sidewalks until they could secure a piece of land to erect a shed or firehouse. Respected community members, volunteer firemen took their training and work seriously. In 1802 a penalty system assessed fines to anyone who missed practice or a fire.

A company of eight "bagmen" was formed in 1805 as a complement to the fire department. These men, wearing special white painted hats bearing a bold black letter "B" were charged with gathering, bagging, and protecting the valuables from any building on fire and seeing that these things were safely returned. 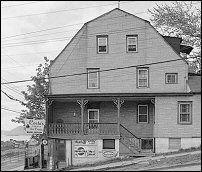 By 1810, village trustees appointed fire wardens to examine houses and businesses and see that their chimneys and fireplaces were in good repair and that they had sufficient buckets. Selah Reeve, whose house still stands on the corner of Montgomery and South, was the first such warden.

In 1838 the trustees created the position of chief engineer and appointed Benoni Howell as the first chief. That year they also hired a man, Jesse Purdy, to keep open holes cut in the ice of the Hudson River for access by the fire department.

Newburgh quickly adopted innovations in fire protection. The department purchased suction hose (short metal cylinders assembled and wrapped with canvas) early in the century, followed in 1820 by hemp hose woven without seams, and in 1835 by riveted leather hose. The street warden erected poles on which the firemen could stretch and dry hose after use at fires.

Although the firemen were volunteers, the village paid for equipment and its housing and maintenance. Village trustees first set the number of firemen at 20, then 50 per company. By the time volunteer companies gave way to paid firefighters in the twentieth century, the city had authorized seven companies of